Closing the summer on a high note, the long-awaited CARLA 0.9.10 is here! Get comfortable. This is going to be an exciting trip.

CARLA 0.9.10 comes with the trunk packed of improvements, with notable dedication to sensors. The LIDAR sensor been upgraded, and a brand-new semantic LIDAR sensor is here to provide with much more information of the surroundings. We are working to improve the rendering pipeline for cameras and, on the meantime, some changes in the sky atmosphere and RGB cameras have been made for those renders to look even better.

This idea of renovation extends to other CARLA modules too. The architecture of Traffic Manager has been thoroughly revisited to improve the performance, and ensure consistency. It is now deserving of the name TM 2.0. The integration with Autoware has been improved and eased, facilitating an agent that can be used out-of-the-box. These improvements come along with the first integration of CARLA-ROS bridge with ROS2, to keep up with the new generation of ROS. Finally, the pedestrian gallery is going under renovation too. We want to provide with a more varied and realistic set of walkers that make the simulation feel alive.

There are also some worth-mentioning additions. The integration with OpenStreetMap (still experimental), allows users to generate CARLA maps based on the road definitions in OpenStreetMap, an open-license world map. A plug-in repository has been created for contributors to share their work, and it already comes with a remarkable contribution. The carlaviz plug-in allows for web browser visualization of the simulation. It has been developed and maintained by wx9698. We would like to take some extra time to thank all the external contributors that were part of this release. We are grateful for their work, and all their names will figure both in this post, and the release video.

Beginning with 0.9.10, CARLA packages will only provide support for Python3. If necessary, make the build from source to compile the PythonAPI for Python2.

First and foremost, the performance of the LIDAR sensor has been greatly improved. This has been achieved while also providing with new colliders for the elements in the scene. The sensor representation of the world is now more detailed, and the elements in it are described much more accurately.

Some new attributes have been added to the LIDAR parameterization. These make the sensor and the point cloud behave in a more realistic manner.

The coefficient of attenuation may depend on the sensor’s wavelenght and the conditions of the atmosphere. It can be modified with the LIDAR attribute: atmosphere_attenuation_rate.

This sensor simulates a rotating LIDAR implemented using ray-casting that exposes all the information about the raycast hit. Its behaviour is quite similar to the LIDAR sensor, but there are two main differences between them.

The capabilities of this sensor are remarkable. A simple visualization of the the Semantic LIDAR data provides with a much clear view of the surroundings.

The semantic ground-truth has been extended to recognize a wider range of categories. Now, the data retrieved by semantic segmentation sensors will be more precise, as many elements in the scene that were previously undetected, can be easily distinguished.

Here is a list of the categories currently available. Previously existing ones are marked in grey.

OpenStreetMap is an open license map of the world developed by contributors. Sections of these map can be exported to an XML file in .osm format. CARLA can convert this file to OpenDRIVE format, and ingest it as any other OpenDRIVE map using the OpenDRIVE Standalone Mode. The process is detailed in the documentation, but here is a summary.

1. Obtain a map with OpenStreetMap — Go to OpenStreetMap, and export the XML file containing the map information.

2. Convert to OpenDRIVE format — To do the conversion from .osm to .xodr format, two classes have been added to the Python API.

3. Import into CARLA – The OpenDRIVE file can be automatically ingested in CARLA using the OpenDRIVE Standalone Mode. Use either a customized script or the config.py example provided in CARLA.

Warning! The roads generated end abruptly in the borders of the map. This will cause the TM to crash when vehicles are not able to find the next waypoint. To avoid this, the OSM mode is set to True by default. This will show a warning, and destroy vehicles when necessary.

Up until now in the Python API, only carla.Vehicle, carla.Walker, and carla.Junction had access to a bounding box containing their corresponding geometry. Now, the carla.World has access to the bounding boxes of all the elements in the scene. These are returned in an array of carla.BoundingBox. The query can be filtered using the enum class carla.CityObjectLabel. Note that the enum values in carla.CityObjectLabel are the same as the semantic segmentation categories.

Moreover, a carla.BoundingBox object now includes not only the extent and location of the box, but also its rotation.

Warning! All bounding boxes accessed through carla.World are described in world space. On the contrary, the bounding box of a carla.Vehicle, carla.Walker or carla.Junction, stores its location and rotation relative to the object it is attached to.

We have worked on the vehicle physics so that their volumes are more accurate, and the core physics (such as center of mass, suspension, wheel’s friction…) are more realistic. The result is more noticeable whenever a vehicle turns or collides with another object. The balance of the vehicle is much greater now. The response to commands and collisions is no longer over-the-top, but restrained in favor of realism.

Moreover, there are some additions in carla.Actor that widen the range of physics directly applicable to vehicles.

A new repository has been created purposely for external contributions. This is meant to be a space for contributors to develop and maintain their plug-ins and add-ons for CARLA.

Take the chance, and share your work in the plug-in repository! CARLA is grateful to all the contributors who dedicate their time to help the project grow. This is the perfect space to make your hard work visible for everybody.

This plug-in was created by the contributor wx9698, and it already figures in the carla plug-ins repository. It creates a web browser window with some basic representation of the scene. Actors are updated on-the-fly, sensor data can be retrieved, and additional text, lines and polylines can be drawn in the scene.

There is detailed carlaviz documentation already available, but here is a brief summary on how to run the plug-in, and the output it provides.

3. Run carlaviz. In another terminal run the following command. Change <name_of_Docker_image> for the name of the image previously downloaded.
E.g. carlasim/carlaviz:latest or mjxu96/carlaviz:0.9.9.

The plug-in shows a visualization window on the right. The scene is updated in real-time. A sidebar on the left side contains a list of items to be shown. Some of these items will appear in the visualization window, others (mainly sensor and game data) appear just above the item list. The result will look similar to the following.

For this iteration, the inner structure and logic of the Traffic Manager module has been revamped. These changes are explained in detail in the Traffic Manager documentation. Here is a brief summary of the principles that set the ground for the new architecture.

The CARLA-ROS bridge now provides support for the new generation of ROS. This integration is still a work in progress, and the current state can be followed in the corresponding ros2 branch.

The CARLA-Autoware bridge is now part of the official Autoware repository. The Autoware bridge relies on the CARLA ROS Bridge and its main objective is to establish the communication between the CARLA world and Autoware (mainly through ROS datatypes conversions).

The CARLA-Autoware repository contains an example of usage, with an Autoware agent ready to be used out-of-the-box. The agent is provided as a Docker image with all the necessary components already included. It features:

3. Run a CARLA server. You can either run the CARLA server in your host machine or within a Docker container. Find out more here.

4. Run the carla-autoware image. This will start an interactive shell inside the container.

6. Select the desired destination. Use the 2D Nav Goal button in RVIZ. The output will be similar to the following.

Find out more about these features either in the original RSS paper, or reading the rss-lib documentation on unstructured scenes, and behavior model for pedestrians.

For the sake of clarity, the Python API docs now include the units of measurement used by parameters, variables and method returns. These appear inside the parenthesis, next to the type of the variable.

This release includes the first iteration on a major extension of the pedestrian gallery. In order to recreate reality more accurately, one of our main goals is to provide with a more diverse set of walkers. Moreover, great emphasis is being put in the details: meticulous models, attention to facial features, new shaders and materials for their skin, hair, eyes… In summary, we want to make them, and therefore the simulation, feel alive.

So far, there are three new models in the blueprint library, a sneak peek on what is to come. Take a look at the new additions! 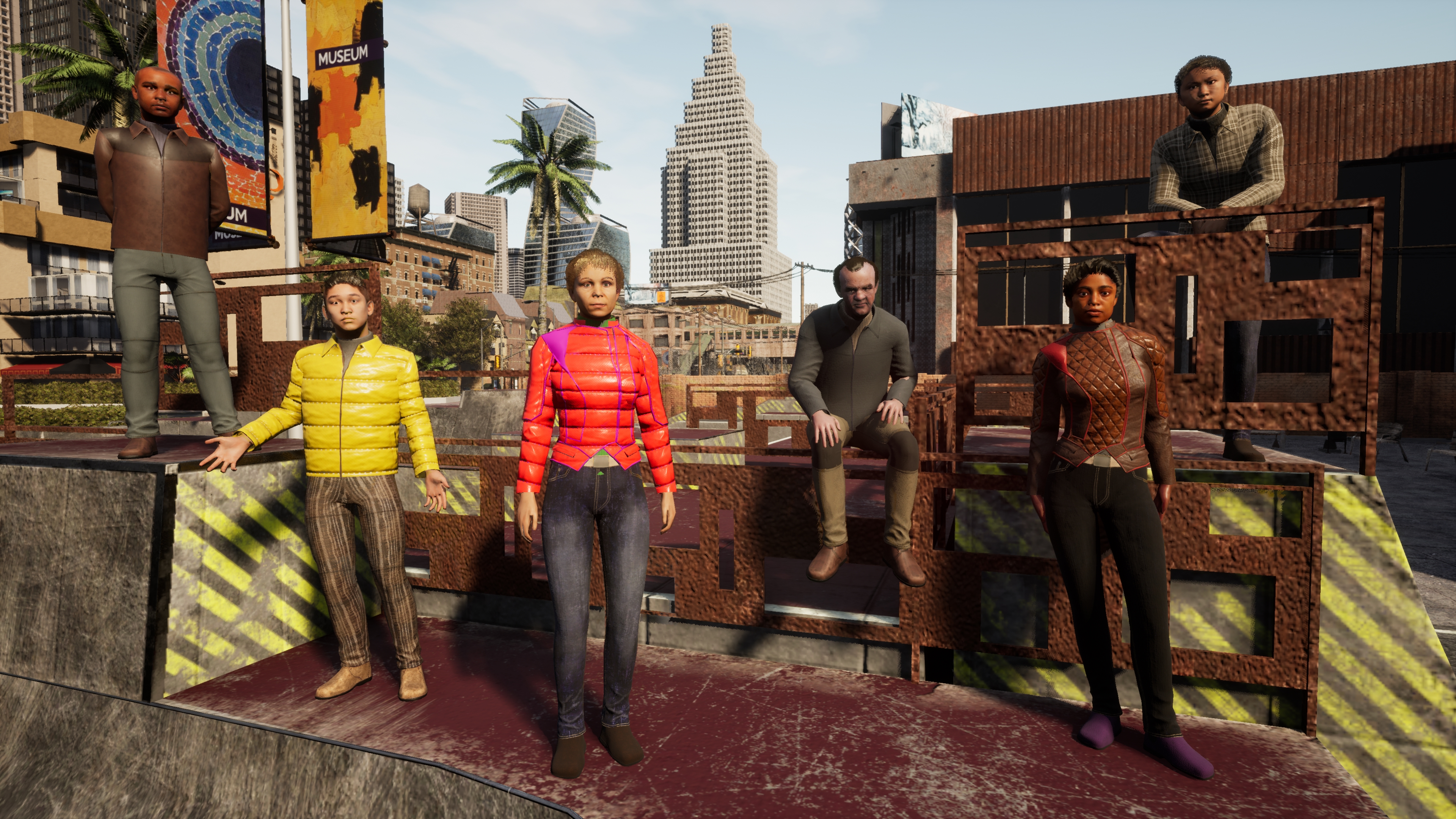 The light values of the scene (sun, streetlights, buildings, cars…) have been adjusted to values closer to reality. Due to these changes, the default values of the RGB camera sensor have been balanced accordingly, so now its parameterization is also more realistic. 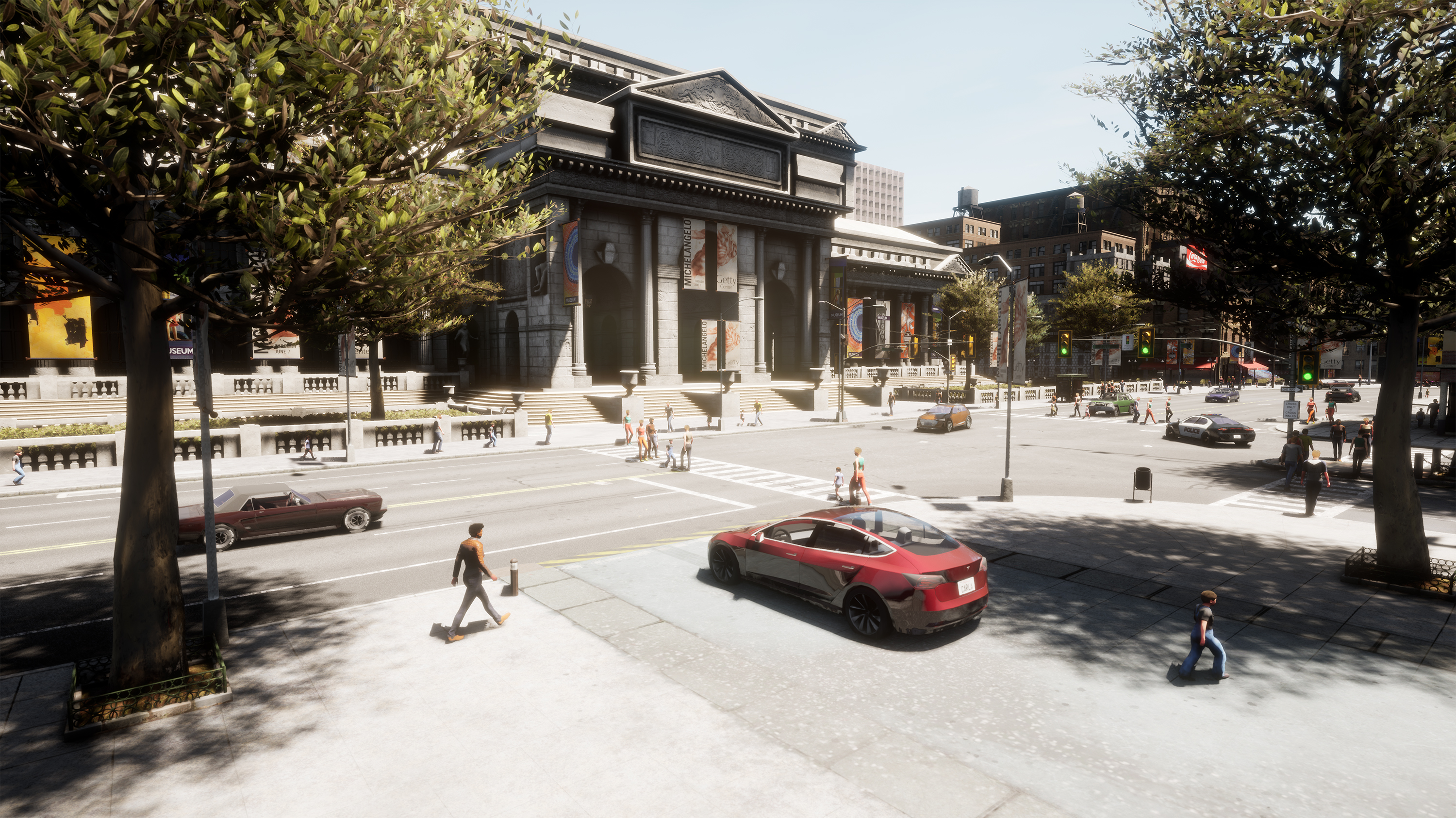 The default mode of the RGB cameras has changed to auto exposure histogram. In this mode, the exposure of the camera will be automatically adjusted depending on the lighting conditions. When changing from a dimly lit environment to a brightly lit one (or the other way around), the camera will adapt in a similar way the human eye does.

The eye adaptation can be disabled by changing the default value of the attribute exposure_mode from histogram to manual. This will allow to fix an exposure value that will not be affected by the luminance of the scene.

We would like to dedicate this space to all of those whose contributions were merged in any of the project’s GitHub repositories during the development of CARLA 0.9.10. Thanks a lot for your hard work!

Find out more in the official site!